She is clothed with strength and dignity,
and she laughs at the days to come.

She opens her mouth in wisdom,
and on her tongue is kindly counsel.

She watches the conduct of her household,
and eats not her food in idleness.

Her children rise up and praise her;
her husband, too, extols her:

"Many are the women of proven worth,
but you have excelled them all."

Charm is deceptive and beauty fleeting;
the woman who fears the LORD is to be praised.

Give her a reward of her labors,
and let her works praise her at the city gates.

Born in Swissvale, PA, Mary worked at the Charles Edward Photography Studio and married the late Eugene Anthony Cabot in 1951. Much loved by her children, Kathy (Joe) Uram of Harrisburg, PA, Michael (Barb Arabia), Martin (Deb Ciranni), Nancy (Bush) Prisby, Jim (Kathy), and David, all of Pittsburgh, PA, grandchildren Devon, Zachary, Meaghan, and Sam, and in-laws, nieces, nephews, her cousin, and friends. Retired employee and volunteer at Montefiore Hospital in Oakland, PA. Longtime member of St. Maurice Parish in Forest Hills where she served as a Eucharistic Minister, carrying Communion to homebound parishioners in the church community as well as to the sick at UPMC Montefiore.

The loving, kind-hearted compassion Mary brought to these visits was returned in kind by those who received it. Nominated in 1999 by then-pastor, Fr. Robert Franco, she received the "Manifesting the Kingdom" award from Bishop Donald W. Wuerl. Her warm, caring personality and great wit earned her the love and respect of family, friends, and colleagues. Mary spent her final years living with dementia. All her good came back to her through the prayers and support of family and friends, and the comprehensive care she received from a network of wonderful, dedicated people who, like Mary, carry out God's work through serving others. The Cabot family extends heartfelt thanks to all.

I can't tell you how much happiness you have given us in your little short life... I still get tears in my eyes when I look at you, see you smile, or when you "talk" to us.
It's a feeling no one can describe.
~*~
I hope you have a good life, Sam - a happy one and a fulfilling one. I hope you will feel the pride of being independent, the satisfaction of learning new things - from your first step through all your "firsts."
~*~
I especially hope that when you make important decisions,
you will try to imagine what you will think of those decisions five years down the road.

If you make a decision that's not quite right,
admit it and forgive yourself - we've all made some of those.

If you make one that is silly -
laugh about it - we've all made those too.

If you make a decision that is right and feels good,
be proud of yourself - you will have earned it.
~*~
If it is your life's plan to have children of your own, then I hope you will see your child's or children's children and know what I am feeling now.
~*~

excerpts from a letter written by Nana to her infant grandson, Sam - February 24, 1998

Jokes abound of "the in-laws"... but mum could never be described in such a way. She did enjoy a good chuckle though and provoked laughter all the way to her final days. From the day we first met she was a reassuring and calming presence. With open arms and heart she welcomed me as family, prayed when I traveled and celebrated my triumphs. She was unwavering in character, compassion and affection... someone you could always count on. That is how I will remember this special friend of mine.

Processional - "Be Not Afraid"

She is clothed with strength and dignity, and she laughs at the days to come. She opens her mouth in wisdom, and on her tongue is kindly counsel. She watches the conduct of her household, and eats not her food in idleness. Her children rise up and praise her; her husband, too, extols her:

"Many are the women of proven worth, but you have excelled them all." Charm is deceptive, and beauty fleeting; the woman who fears the LORD is to be praised. Give her a reward of her labors, and let her works praise her at the city gates.

When I was a child, I used to talk as a child, think as a child, reason as a child; when I became a man, I put aside childish things. At present we see indistinctly, as in a mirror, but then face to face. At present I know partially; then I shall know fully, as I am fully known.

So faith, hope, love remain, these three; but the greatest of these is love.

People were bringing little children to him, for him to touch them. The disciples scolded them, but when Jesus saw this he was indignant and said to them, "Let the little children come to me; do not stop them; for it is to such as these that the kingdom of God belongs. In truth I tell you, anyone who does not welcome the kingdom of God like a little child will never enter it". And he took them up in his arms, laid his hands on them, and blessed them.

Commendation - "I Know That My Redeemer Lives"

Recessional - "Here I Am Lord" 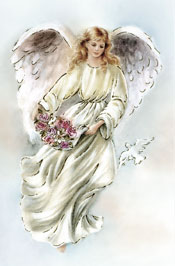 Your gentle face and patient smile with sadness we recall.
You had a kindly word for each and died beloved by all.

The voice is mute and stilled the heart that loved us well and true,
ah, bitter was the trial to part from one so good as you.

You are not forgotten, nor will you ever be
as long as life and memory last, we will remember thee.

We miss you now, our hearts are sore, as time goes by we miss you more.
Your loving smile, your gentle face no one can fill your vacant place.